OK, OK. I haven't posted anything in a month, but I have been working on this project! Really! I've made posters and displayed them at events to get the word out and cut regions into the Kingdom polygons. With the deadline of December 31, 2013 looming, I'm focusing on mapping kingdom branches.

There was an East Kingdom Service University on November 23, 2013 in Concord, NH (http://ekserviceuniversity.wordpress.com/).  There were some great classes and I wanted to lead a round-table discussion on SCA recruitment (or "talent scouting") with Sir Kyppyn Kirkcaldy.  As far as I know, there haven't been too many Service Universities over the years, so I figured this would be a good venue for some posters. 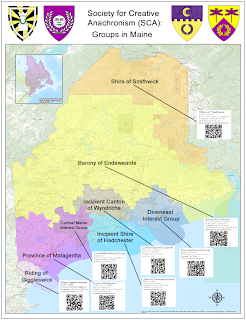 The first poster was one I made for The Fort Knox Medieval Tournament in September, which is an SCA public demonstration hosted by the Barony of Endewearde at Fort Knox in Bucksport, ME.  Over the years, I've come to realize that people from all over Maine visit the Fort and see our demo.  Some want to know if there is an SCA group where they live. What a great opportunity for a map!  I collected contact information from each of the groups (including groups just getting started) in Maine and made a QR code for their website or social media page.  I need to work on a few things, but it turned out pretty well.  My goal is to print more of these and share them with the other groups so that we can all benefit from them at other SCA demos.  I'll be elated if anyone pulls out a smart phone, scans the QR code, and contacts the local representative.  Fingers-crossed! 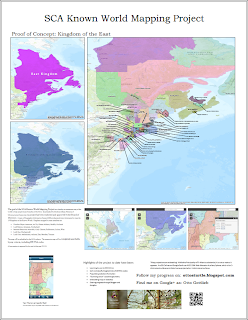 The next poster was for the SCA Known World Mapping Project.  Because the East Kingdom is mostly mapped, I used it as a proof of concept.  It show the extent of the East Kingdom, the regions and Principality of Tir Mara, and the local branches.  It introduces the project team, goals, progress, the smart phone/tablet app, and this blog.  I kept the "WGS 1984 Web Mercator Auxiliary Sphere" projection in the three main maps, which I should probably change.  It makes Canada look HUGE and the rest of the Kingdom tiny.  Labeling the state-side branches was a bit of a challenge and later discovered that a couple didn't get labeled.  Oops.  All-in-all, it's a good start.  I even saw a slight bump in blog views!

The maps are taped down to foam-core, poster board which I left in the trunk of my car after the Service University.  I brought them to our fighting and fencing practice the following Sunday, where my daughter is a youth fencer.  Mistress Mercedes, EK Seneschal & New Groups person, was there and had a question about the location of a group.  I brought the Known World Mapping Project map of the East Kingdom in and she quickly discovered that it would make sense for a certain incipient group to be part of the Central Region instead of the Southern Region.  Maps can certainly help make informed decisions!

Both maps have since made trips to the Herne the Hunter event in the Barony of Ruantallan (Halifax, NS) and the Barony of Endewearde holiday revel.  The feedback has been positive and suggestions for improvement or corrections have been made.  I certainly appreciate the interest and cooperation.

Cutting the Kingdom regions into a copy of the Kingdom polygons was pretty easy.  From what I can tell, Trimaris doesn't use regions, Meridies and goes by state boarders, Atlantia, AEthelmearc, and the East use state/country boundaries and branch divisions.  There were a few hiccups along the way for unaccounted ZIP/ZCTAs codes, but they are mostly figured out.  I hope to post that map data shortly.

The big hurdle is corroborating ZIP code lists by the Kingdoms to the ZCTAs.  So far I have found orphaned ZCTAs and a few claimed by more than one group.   There are also questions based on published maps compared to what the Kingdom list/mapped ZCTAs are showing.  I suspect one is more current than the other.  I think there is going to be a beta period to work out the errors.  Once this is done, I'm sure the Kingdoms will appreciated updated ZIP code lists for their local branches.  It's easy to see that this project is going to take a bit of work to keep it updated.  (Let's worry about that later...).

Thanks for your feedback. If you haven't already, please see the FAQ here: http://ottosturtle.blogspot.com/p/frequently-asked-questions.html
If requested, I'll try to get back to you as soon as I can. ;-) ~Otto